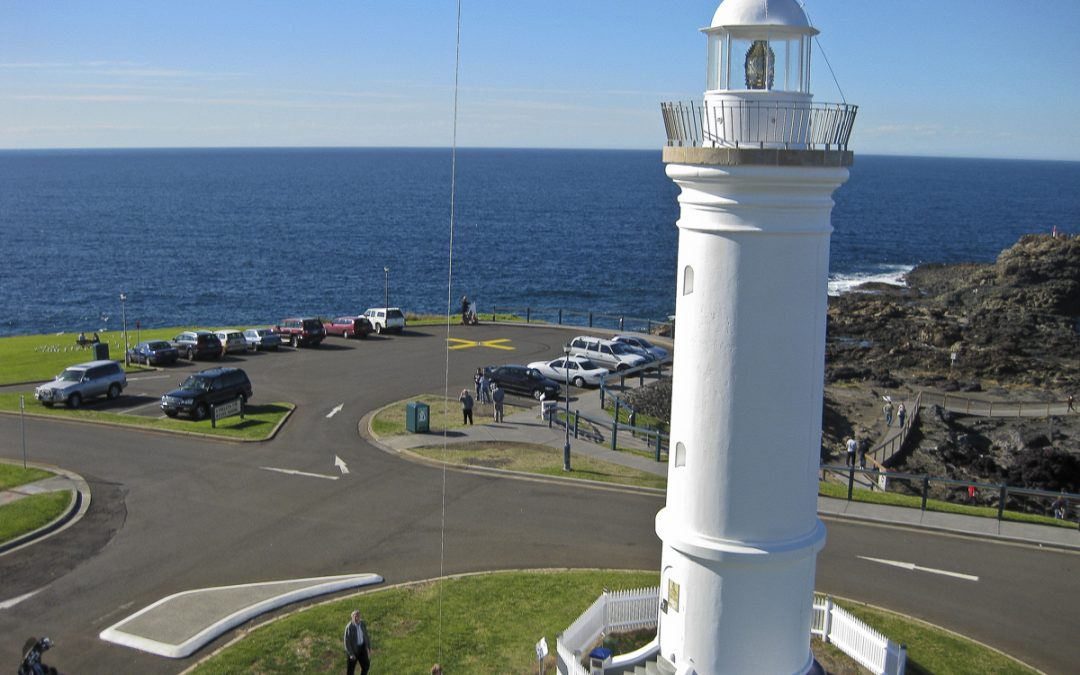 Some of you will remember that 4 years ago I raised Lighthouses of Australia’s concerns about the placement of an ANZAC logo on the Kiama lighthouse. Many of you like me will not be surprised to learn its now being proposed that the ANZAC logo be made permanent. Please see my letter below.
If you also see the alarming precedent this sets I urge you to also write to:

On behalf of Lighthouses of Australia, I would like to express our concern about a proposal by Kiama Council and the Kiama Jamberoo RSL Sub Branch to leave the ANZAC logo on the Kiama Lighthouse permanently.
It would appear that yet again the Kiama council have taken a vote in conjunction with the Jamberoo RSL sub branch to leave the ANZAC logo on Kiama lighthouse permanently without any consultation with the community or the appropriate authorities.
As I have stated in previous correspondence to Kiama Council, Gareth Ward and the then minister for lands, Kiama lighthouse is a heritage listed structure on the National Estate register. It is one of the oldest remaining buildings in Kiama.
The lighthouse continues to be an operational navigational aid, including as a daymark. Its unique architecture, white paintwork and internal fabric remain virtually unchanged in its 130 year history. This is particularly in keeping with the nearby historic harbour precinct and Kiama’s rich maritime past.
Lighthouses mean many things to many different people but Kiama lighthouse does not have a direct link to the ANZAC heritage. The lighthouse is not and should not become a war memorial.
Kiama has a wonderful Memorial Arch located in the main street of Kiama. Right next to this, the council has constructed a wall with commemorative plaques dedicated to our fallen soldiers. We are also extremely fortunate to have a tree growing adjacent to the Memorial Arch which is directly from a seed that came from the original Lone Pine at Gallipoli. These structures are very important. They have real relevance to all RSL members, their families and the community.
During the past four years that the ANZAC logo has been on the lighthouse many other charites have been prevented from using the tower to highlight their worthy causes. This is very unfair to the other charities & organisations that have previously used and may intend to use the lighthouse in the future. In the past we were able to highlight many diverse charities and worthy causes such as: Breast Cancer awareness, Mental Health, Domestic violence, Autism awareness and Red Cross.
Sadly, the logo has effectively allowed the RSL to wrongly claim ownership of the Lighthouse. In addition to this, a plinth has been installed at the base of the lighthouse (again without consultation with the community).
Four years ago we had it in writing that their logo would remain for two years which was extended to four. (Without the agreed review by Council)This was to cover the Great Wars one hundred year commemorative period. It has always been a concern that despite an undertaking by the council and the RSL to remove their logo at the end of this commemorative period that attempts would be made to leave their logo or a replacement logo in place permanently.
This cannot be allowed to occur. Neither the council nor the RSL own or maintain the lighthouse. Other worthy charities and the wider community who appreciate lighthouses as marine heritage must be handed back their rights to use the lighthouse in an appropriate manner. Blow Hole Point and the lighthouse precinct is not a war memorial.
We appreciate that the Kiama Jamberoo RSL sub branch, have moved their ANZAC dawn service to the lighthouse precinct. This once a year event is well supported by the community. A projected display could be used to enhance this service with many and varied creative possibilities. We only have to look at the Vivid Festival in Sydney to see how effective this can be. Any logo on the lighthouse tower would exclude this. The option of lighting/projecting on the tower has always been used in the past by the various charities as mentioned above.
Crown Lands Division of NSW Primary Industry are responsible for Kiama lighthouse as well as many others. The proposal for a permanent logo is a major concern not least for the precedence that it sets.
It remains a concern to us that Kiama Council can vote and endorse a proposal yet again on a heritage listed building they neither own, control nor maintain.
With the four year commemoration now past, allowing any permanent logo is merely using the Kiama lighthouse as a billboard to promote the RSL. The wonderful Memorial Arch, Commemorative wall with the names of servicemen inscribed and the Line Pine should be the focus of the council and RSL attention.
Kind regards,
Ian Clifford
President
Lighthouses of Australia 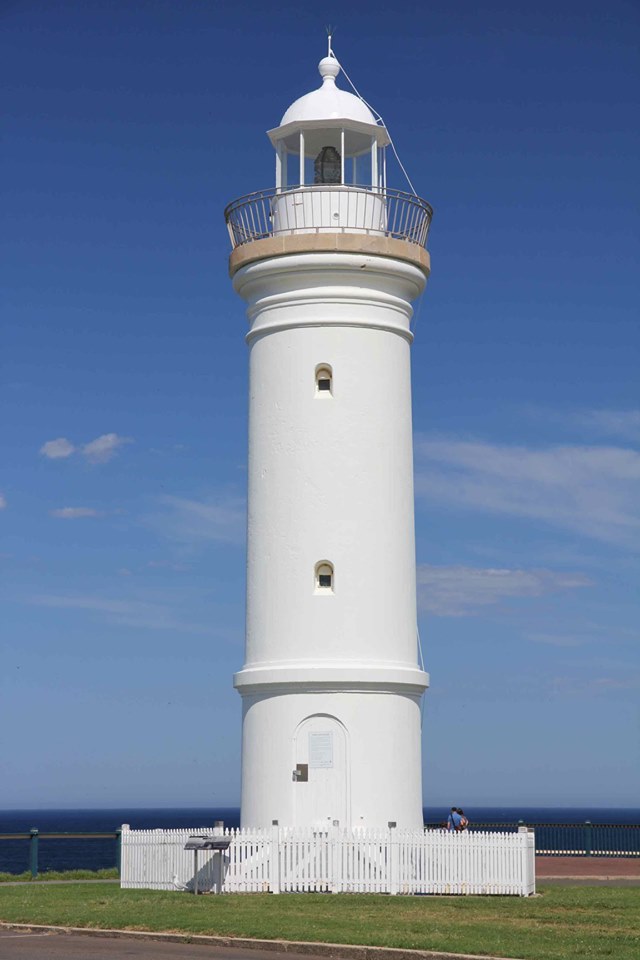 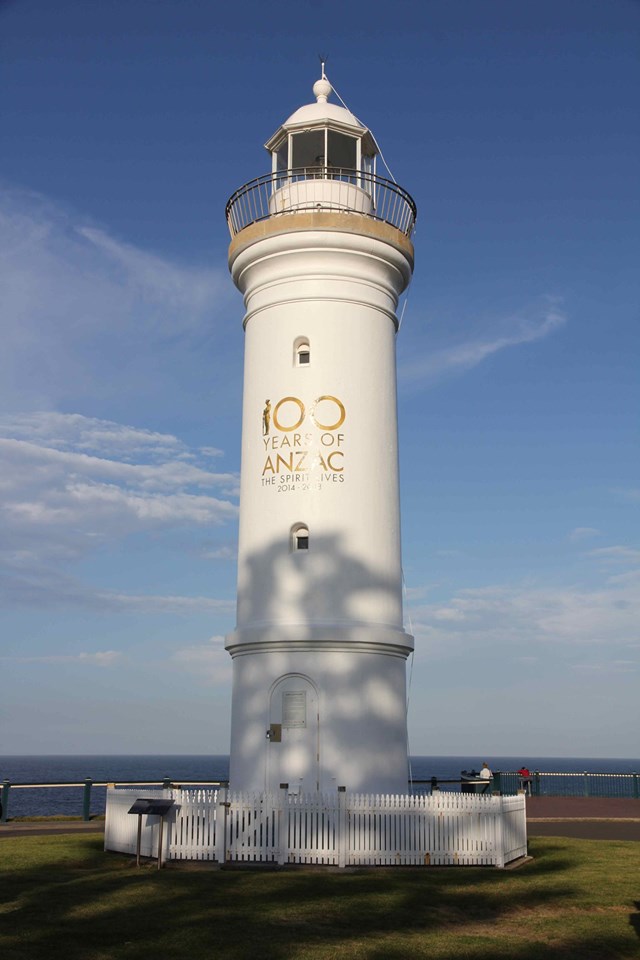